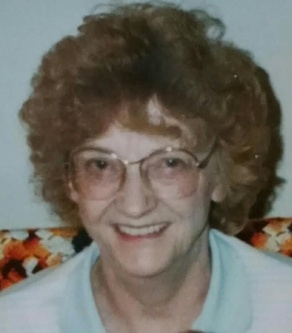 Anna Belle Mitchell, who was born on January 12, 1927 in Creston, Iowa, passed away at Fountain West Care Center in West Des Moines, IA from complications resulting from pneumonia. Anna Belle is survived by a brother Millard Hoskinson (85); husband Otis Edward Mitchell (92); sons Stephen Mitchell (63) and Kenneth Mitchell (61); grandchildren Jeffery, Katherine, Kristen and Mark and great-grandchildren Milo and Benno. Anna Belle was one of five children born to Howard and Gertrude Hoskinson. She was raised in the Adams County area until her family moved to Waukee in 1936. They moved to West Des Moines before her last two years of High School and Anna Belle graduated as Valedictorian in 1944 from Valley High School. Anna Belle met her husband Otis, during her early school years in Waukee. After WWII, Otis was discharged from the military and returned to central Iowa where he reconnected with Anna Belle at one of the many dances held at the Val Air Ballroom. They were married on March 14, 1947 at the First United Methodist Church in Des Moines. Together, they continued to enjoy weekly dances at various venues throughout most of their marriage.Anna Belle steadily worked at secretarial jobs until her children were born. Once her children were in middle school, she re-entered the work force until she ultimately became a legal secretary for over 20 years to one of the partners of a notable Des Moines law firm. In retirement, she doted on her grandchildren and enjoyed reading, crossword puzzles, her computer and Facebook. Anna Belle was a lifelong lover of cats and also enjoyed parakeets in her later years.

In lieu of Flowers, donations in her memory can be made to the Animal Rescue League of Iowa

To order memorial trees or send flowers to the family in memory of Anna Belle Mitchell, please visit our flower store.