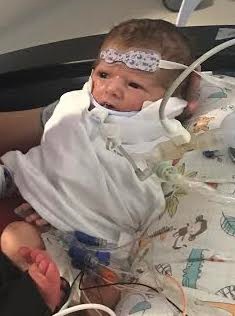 Brooklyn Marie Kammrad, who entered this world on October 26, 2019 in Des Moines, Iowa, passed away shortly after her baptism at the Children's Hospital in Omaha, Nebraska on November 19, 2019.

Brooklyn was a fighter, or as the NICU nurses called her, a cage fighter.  At 20 weeks along, her family found out Brooklyn was suffering from a number of heart abnormalities.  After being born at Mercy Hospital in Des Moines, she was life-flighted to Children's Hospital in Omaha where she began her battle undergoing three surgeries.  Tiny but mighty she was.  Brooklyn wasn't with us long, but she taught her family patience, strength and almighty faith.

Left to cherish Brooklyn's memory are her parents Dan and Sydney Kammrad; brother Lincoln and twin brother Samuel; grandparents S. Earl and Robin Tast and Don and Kathy Kammrad; great-grandmothers Rosella Ullestad and Patricia Tast, along with numerous aunts, uncles and cousins.  She was preceded in death by six great-grandparents, Marvin And Lynda Nelson, Herbert Tast, Edmund and Bernadine Kammrad and Jonas Ullestad.

The family wants to thank Mercy NICU and Omaha Children's Hospital for the excellent care and compassion shown to Brooklyn and her family.

To order memorial trees or send flowers to the family in memory of Brooklyn Marie Kammrad, please visit our flower store.