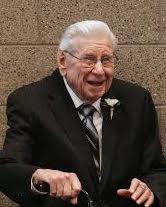 At the age of two, Howard and his family moved to Dallas, IA until settling in Waukee in 1936.  Howard graduated from Waukee High School in 1943 and thereafter entered the U.S. Army during WWII. He was assigned to the Field Artillery but was transferred to the 1294th Combat Engr. Battalion and was sent to the South Pacific, the island of Luzon in the Philippines.  Howard received the bronze combat star, Philippine Liberation Medal and Asiatic Pacific Ribbon.

Following the end of the war, Howard guarded Japanese soldiers and was then sent to General MacArthur’s headquarters in Tokyo in the occupation of Japan.  He returned to Waukee in early 1946 and went on to marry the love of his life, Vivian May Llewellyn in 1947.  For 14 years, Howard was employed as an insurance investigator for a national firm working out of Des Moines.  In 1957, he was transferred to Denver, Colorado.  While living in Colorado, Howard became involved in the mobile home, RV and automobile industries, operating several sales centers throughout Colorado.

The family moved back to Waukee in 1975, and once again Howard became involved in the sales and sales management vocation and was quite successful.  Howard was a long-time member of the Waukee Christian Church and served in many capacities, including many years as a bass singer in the church choir.  He was a former Waukee City Council Member and City Treasurer.  He was a charter member of the Waukee VFW Post 11517 and served six years as chaplain and a trustee.

Howard is survived by his children Ted (Bonnie) Wilson of Louisville, KY and Brian (Sue) Wilson of Marion, IA; grandchildren Jason, Chris, Matt and Connor Wilson, Kelsey Stocking and Mallory Hughes and eight great-grandchildren.  He was preceded in death by his parents and wife of 69 years, Vivian, in 2016.

In lieu of flowers, memorials may be directed to the Waukee Christian Food Pantry or Waukee VFW Post 11517.

To order memorial trees or send flowers to the family in memory of C. Howard Wilson, please visit our flower store.
Send a Sympathy Card