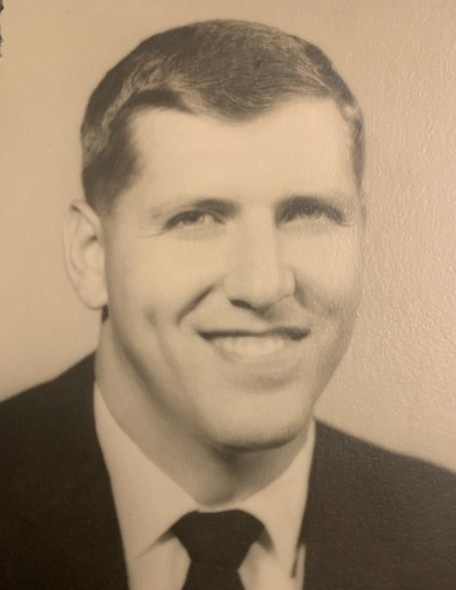 He was born on September 1, 1930 in Kingsley, Iowa, to John and Amy (Kuhnhenn) Black.  He graduated from Kingsley High School, attended Buena Vista College, Storm Lake, and graduated from Westmar College, LeMars.  He was a talented athlete playing football, baseball, basketball and track throughout his school years. He was a gifted, left-handed first baseman with professional aspirations until the Army drafted him.

Chuck taught and coached at Bloomfield, Meriden, Meriden-Cleghorn and Boyden-Hull then joined Cherokee’s Washington High School staff in 1965. He coached many Braves in football, basketball (boys’ and girls’) and track and field. As head track coach, his reign will be remembered as a time of records, state championships and good times.

Chuck loved to fish, hunt, and travel with his family and friends, especially, dear friends Bob and LaVon Roberts.  He was an avid St. Louis Cardinals and Iowa Hawkeyes fan.  He will be remembered for his handsome smile, his belief in following the rules, the many gadgets he created and his devotion to family and friends.

Chuck will be greatly missed. We are grateful for the life lessons that he instilled in his family as well as the students who were lucky to have crossed his path. His philosophies will always be remembered.

His life was like the game of baseball, full of challenges and victories, but breathtakingly awesome.

Cremation will take place followed by a private family service at Ernst Funeral and Cremation Services in Waukee, Iowa.

In lieu of flowers, donations may be made to Sunny View Care Center, Ankeny, Iowa or to the Veteran’s Administration in Charles V. Black’s honor.

To order memorial trees or send flowers to the family in memory of Charles Black, please visit our flower store.