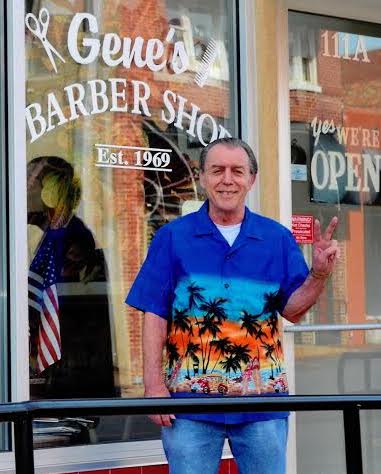 Eugene "Gene'O" Lee Wolf, age 70, passed away from health complications on Monday December 9, 2019 in Des Moines, IA surrounded by his family. Gene was born in Rice Lake, Wisconsin on October 17, 1949, and resided in Waukee, IA near his daughter Katie from 2016 through 2019.

Gene grew up in Wisconsin and was involved in numerous sports and activities throughout his school years, excelling in baseball and wrestling, setting records throughout his high school career. Following in his father's footsteps, he graduated from barber school in Wisconsin after high school. Gene was a successful barber at various shops in Wisconsin for 6 years before moving to the Twin Cities where he worked mainly in the construction industry while continuing regular involvement in various baseball and bowling clubs. Gene then moved to NW Arkansas in 1994 where he opened "Gene's Barber Shop" in which he owned and operated the 3 chair shop on the square in historic downtown Bentonville, AR, alongside barber Clovis Hance (deceased). Gene had many regular customers, some recognized patrons including Sam Walton, founder of Walmart. The shop was decorated with countless sports memorabilia including that of the Bentonville Tigers and Green Bay Packers. Gene retired in 2014 after barbering for 46 years at the age of 64.

Gene's interests included golfing on the weekends, watching sports including boxing, baseball, and football, traveling around the world with family and friends, and spending time with his beloved Grandson Gabe. Gene also found his faith to be a prominent part of his life. Gene never met a challenge he would not take on, worked tirelessly to provide for his family, and always helped any friend or neighbor in need. Gene had a special gift; He made an impact on everyone he came in contact with. He could spark laughter within any room, and could make even a stranger smile at any moment.

From one of Gene's favorite athletes, Muhammad Ali: "Don't count the days, make the days count."

The family would like to extend their gratitude to The Taylor Hospice House staff, Unity Point physicians, nurses and therapists, Recover Health staff, and Nurse Force staff for all their care of Gene.

To order memorial trees or send flowers to the family in memory of Eugene Lee Wolf, please visit our flower store.
Send a Sympathy Card