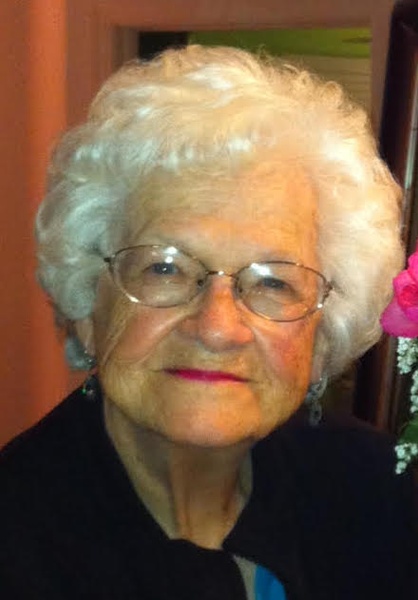 Helen LaRue (Stake) Dessenko was born in Surrey, North Dakota on May 14, 1933 - notably, the same Sunday as Mother’s Day for that year - to Letha Zelda and David Calvin Stake.  On the morning of July 5, 2021, Helen passed away peacefully.  Coincidentally, the day marked the 16th anniversary of her husband, Melvin John Dessenko’s passing - July 5, 2005.

Helen was eighth in a family of ten children.  As a working mom, and later a grandmother, a house full of party guests of all ages never seemed to phase her.  Helen knew how to navigate, feed and entertain a large group!

Helen spent her first years of marriage and started a family in Minot, ND with World War II veteran, Melvin.  In 1952, they would move to Waukee, Iowa, where the family would grow and remain for most of Helen’s years.

Her broad-ranging career began at the age of seventeen and spanned tenures in the restaurant business, retail services, and manufacturing.  Over the years, Helen made many life-long friends and recalled fondly working for employers such as: Alice’s Spaghetti Land, Parker Games, Wolf’s Department Store, and Maurices.

Helen’s interests included a good road trip and a well-running, preferably red car on the   open road.  The Dessenko's traveled to many corners of the United States via the highways and byways, to enjoy and learn more about the American experience.  Well into the 21st century, her enduring passion for the music of her youth was evident; Helen on a Saturday evening could often be found at home enjoying musical variety television, particularly The Lawrence Welk Show, which gained popularity in the 1950s.  The show could get Helen on her feet and dancing the night away with the show’s host and audience.  Another special talent of Helen was yodeling, especially to the tunes of Country & Western stars such as Dale Evans.  These charming, distinctive vocalizations were performed much to the delight and bewilderment of her grandchildren.

Often encouraged to open her own restaurant, Helen reserved her culinary delights mostly for her extended family and closest friends.  Helen shared with a local paper in 1957: “I never learned to bake at home.”  Since her older sisters took care of the baking at home, Helen learned to cook after she and Mel were married.  Of note, Mrs. Dessenko produced championship-quality desserts in her home kitchen and was renowned in the Waukee area for her pie-making, especially pumpkin and peach.

She was preceded in death by her husband of over 50 years, Melvin “Mel" Dessenko and their only son Jerald Wayne (2), born in 1951.  She outlived her parents and the majority of her siblings.

The family welcomes donations to a charitable or personal cause in Helen’s name to honor her memory. They suggest two local, caregiving organizations, in particular:  Perry Lutheran Homes (of Perry, IA) and/or Suncrest Home Health and Hospice (of Des Moines, IA).

Helen’s three daughters and their families wish to thank wholeheartedly the professional staff of Perry Lutheran Homes and Suncrest Hospice for their warm, loving and compassionate care.

Private family graveside services have been planned at the Waukee Cemetery. Ernst Funeral & Cremation Services of Waukee have been entrusted with final arrangements.

To order memorial trees or send flowers to the family in memory of Helen Dessenko, please visit our flower store.