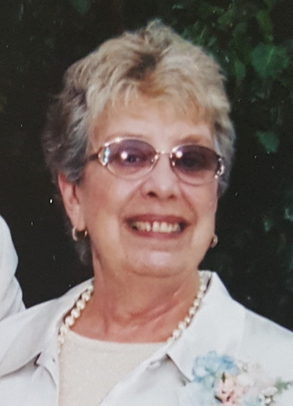 When our mother heard dad was getting tired of waiting for her, she decided to take his hand and go home to his arms in heaven. Our beloved mother, Hilda Johnson, joined her loving husband, Axel, in heaven on April 28, 2018. She was 87 years young. Hilda Johnson was preceded in death by her parents, John and Elizabeth Leigh, her sisters Lily Green, Madge Jones, and Elizabeth (Betty) Farrell all of England. She is survived by her children, Wayne (Rebecca) Johnson, John (Liz Hauer) Johnson, Teresa (Mark) Harvey, Stephen (Rebecca) Johnson, Lori Johnson-Weller and numerous grandchildren, great grandchildren and great-great grandchildren who all adored her. Across the pond, our mother leaves behind nieces and nephews, great and great-great nieces and nephews in England. Hilda was the third of four daughters born to Elizabeth and John Leigh on March 6, 1931 in Warrington, England. According to mom, her sisters spoiled her rotten and she loved them for it. After finishing her secondary education at age 15, our mother was trained as a telephone operator and learned to dance at Jim Brennan's Ballroom Dancing School. At two coupons each, during the rationing in England during the war, our mother was never without her nylons thanks to her sisters. She became known, with her lovely English accent, as the "Voice of Hovland Swanson" when she worked for them as their telephone operator in the 70's in Lincoln, Nebraska. Once our parents relocated to Superior, Wisconsin, mom worked for a short time at Garon Knitting Mill in Superior. But mostly, mom loved being a wife and mother to her five children. She made sure all of us were fed well, tucked in safe at night, disciplined ("Just wait till your father gets home!") when we needed it, and loved fiercely and unconditionally. She was famous for being a fantastic cook, especially her legendary Cream Pie and Swiss Steak for which no recipes existed. To this day, none of us can quite recreate either one of them. Our mother was seldom without a smile on her face and had a wicked sense of humor that made everyone's day brighter. She loved everything about being a military wife and served graciously for our country by supporting her husband's career. Hilda met Axel while he was serving in the USAF for the Berlin Air Lift in England. As my father once penned in a love letter to our mother, "A spur of the moment decision toward service, an assignment across the seas, a meeting of two amongst hundreds of thousands-for love, it fairly boggles the mind." He's right, it fairly boggles the mind. Please join us June 6, 2018 at Ernst Funeral Home in Waukee, Iowa to unite for eternity, both Hilda and Axel Johnson who passed through those pearly gates on August 27, 2016. The service to celebrate the lives of both our parents will be at 11:00 a.m. followed by a reception immediately after. A military service will be held at the Iowa Veteran's Cemetery in Adel, Iowa at 2:00 p.m. after the reception, a short 15 minute drive away. As a family, we would like to thank all the loving, selfless staff at the Veteran's Home in Marshalltown, Iowa for the boundless care extended to our mother during her stay. Treated with dignity and respect, our mother left this earth with gentle touches, kind words, and laughter right up to the end. Thank you from the bottom of our hearts for all you do for our nation's veterans and their spouses.

To order memorial trees or send flowers to the family in memory of Hilda Johnson, please visit our flower store.