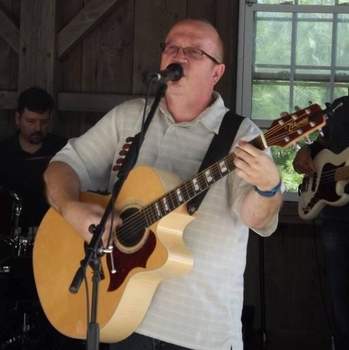 Kim Dorr was born in Guthrie Center, Iowa on July 26, 1963, to George and Lois (Fagin) Dorr. Kim graduated from Y-J-B High School in 1981 and joined the Air Force the same year. He was stationed at Ellsworth AFB in South Dakota and the SAC command at Offutt AFB in Omaha until his discharge. Kim was married to his childhood sweetheart that he met when he was 14, and he and Lesli would have been married 29 years this September. They always joked that marriage needs to be measured in dog years, so that would have been 203 years together. They lived in Cleveland, Ohio for 13 years after getting married, where Kim worked in banking and insurance. They moved back to Iowa in 2000 to raise their family. He was a hockey dad for many years, a lifelong fan of the Colts and always took a lot of ribbing for being an Ohio State Buckeye fan surrounded by all these Cyclones and Hawkeyes. Kim and Lesli were blessed with three children: son Kyle, who is a Petty Officer 1st class, GM1 in the US Navy (wife Reese); stillborn daughter Kelsey (1998) and daughter Kaley who just graduated from Waukee High School this year and will be pursuing a career in nursing. Kim absolutely adored his grandchildren Lily and Silas. Kim’s lifelong love, though, was his music. He played guitar and sang in numerous bands in Central Iowa and Ohio, who will always remember him for his fun loving and energetic personality. His joy was performing and he hoped to spread the joy to everyone who came out to hear him play. He was blessed to have shared the stage with so many great musicians over the years. Kim is survived by his loving wife, children and grandchildren, as well as his father George Dorr of Yale; siblings, in-laws, out-laws, as well as numerous nieces, nephews, aunts, uncles, cousins and lifelong friends. He was preceeded in death by his mother Lois Dorr, daughter Kelsey and the best dog in the world, Cooper.
He leaves behind a trail of family and friends across the country (and even family in Guam) that will miss his fun personality and his devoted friendship. He will be dearly missed by all who knew and loved him. Kim left this world on June 19th to rock out on a more Heavenly stage, after complications from a severe stroke. Visitation will be held Sunday, June 25, 2017 from 5:00 to 7:00 p.m.; with a memorial ceremony on Monday June 26, 2017 at 9:30 a.m., both at Ernst Funeral Home in Waukee. Burial will follow the service at the Iowa Veterans Cemetery. In lieu of flowers, the family suggests that donations be sent to Wounded Warrior Project.
To order memorial trees or send flowers to the family in memory of Kim Duane Dorr, please visit our flower store.