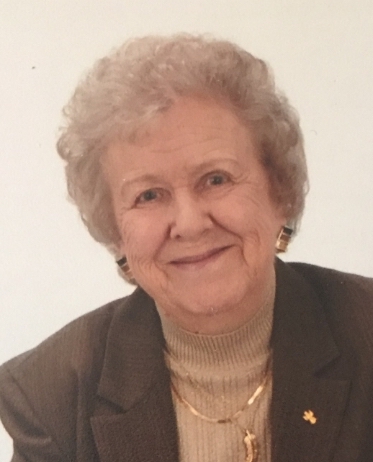 Lois Louise Stone-Bannister, who was born on September 13, 1924 to loving parents Emma & Roy Gillispie near Peru, Nebraska, passed away August 3, 2021 in Grimes, IA.  Visitation will be held Friday, August 20, 2021 from 6:00 to 7:00 p.m. and services will be held Saturday, August 21, 2021 at 11:00 a.m.,  both at Ernst Funeral Home in Waukee.  Interment to follow at the Waukee Cemetery.  The funeral service will be live-streamed and can viewed at the time or anytime thereafter at: www.facebook.com/ernstfuneralcremation .

Lois attended school in Auburn, NE and Brook, NE, where she graduated in 1944. She was employed in Omaha, NE where she met Earl Stone, whom was from Bayard, Iowa and was at the time in the Army and later married Earl on October 12, 1944 in Tacoma, Washington.  They owned and operated their restaurant in Omaha and then Bayard.

Lois belonged to the Waukee Christian Church her entire adult life and served for 40 years.  She loved God and truly believed her mission was to pass the love on that God had so blessed her with.  Lois and Earl were charter members of the Boy Scouts & Cub Scouts Pack 178 in Waukee and the Waukee Little League organized in 1957 when their sons were eight and 10 years old.  She belonged to the Blank Guild and served in many positions in the Waukee Christian Church; from Sunday School Teacher to Vice Chairman of the Board.

Lois was employed 27 years in the baby and children's department at Sears where she also had many friends and loved serving parents and grandparents.

Lois was preceded in death by her parents; husband Earl of 48 years; second husband Orville Bannister of 25 years; brothers Leroy and Darrell and sisters Rosalie and Reva.  She is survived by sons Larry (Marcia) Stone of Des Moines and Gary (Linda) Stone of Greeley, CO; brother Richard (Pat) of Alabama and sister Mildred of Waukee; grandchildren Zachary Stone, Jeff (Lori) Stone, Brian (Courtney) Stone; seven great-grandchildren; step-daughter Connie (Kenny) Hermann; step-son Barry (Ginny) Bannister; numerous step-grandchildren and step-great-grandchildren and many additional family members and friends who she truly loved and was blessed to have in her life.  God Bless You All!

Ernst Funeral & Cremation Services of Waukee has been entrusted with Lois' final arrangements.

To order memorial trees or send flowers to the family in memory of Lois Stone Bannister, please visit our flower store.
Send a Sympathy Card