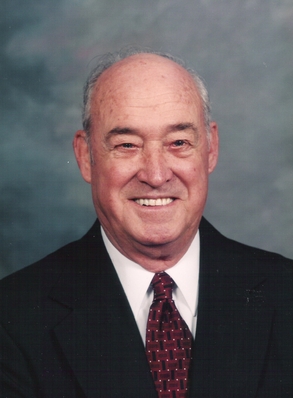 Rex L. Downard, 95, passed away at home on September 16, 2015. Rex was born in 1920 to Robert and Alice Downard in Creston, IA. He was the “baby” of eight children. In 1942, he married the love of his life, Beverly, and for 73 years they walked hand in hand thru life setting a wonderful example of what marriage should be.
Rex was an avid outdoorsman and looked forward to the changing seasons as they brought fishing trips to Canada and Minnesota and pheasant and deer hunting. He especially looked forward to those times that he spending with his hunting buddies and his son-in-law Dick. He loved to share the hunting/fishing stories of the wonderful times he had with the rest of the family about “the one that got away”, usually at someone else’s expense!
Rex always had a twinkle in his eye, an easy smile, a terrific quick witted sense of humor and was always ready to lend a helping hand to anyone in need. He retired as supervisor from Firestone Tire and Rubber Company after 33 years and then found another passion in driving cars for a local dealership all over the Midwest.
Rex is survived by his wife of 73 years Beverly; his daughters Judy (Dick) Applegate and Patty (Frank) Donnelly; grandchildren Stephanie (Michael) Schermerhorn, Todd Applegate and Robert Speer, Jr. and great-grandchildren Sydney and Seth. He was preceded in death by his brothers Loren, Ed, Glenn, Jimmy, Harold, Charles and sister Shirley as well as numerous nieces and nephews.
A visitation will be held on Saturday, September 19, 2015 at 10:00 a.m., followed by a celebration of life service at 11:00 a.m., both at Waukee United Methodist Church. Online condolences may be expressed at www.ernstfuneralhome.com. Memorial contributions may be directed to the Waukee U.M.C.

To order memorial trees or send flowers to the family in memory of Rex Downard, please visit our flower store.
Send a Sympathy Card