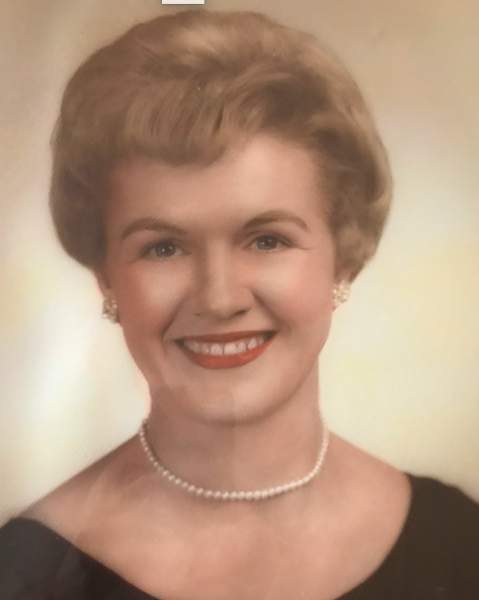 Rowena J. Evans, 96, of Waukee, IA, passed away at Unity Point Methodist Medical Center in Des Moines, Iowa on August 15, 2020. “Ro” was born on May 13, 1924, in Jackson, Ohio, the only child of Clyde and Hester Mayhew. Her mother died of typhoid fever in 1926 when Ro was just two years old. She was raised by her father until he remarried several years later presenting her with a brother, Bob Mayhew, who survives her and still lives in Jackson.

Her favorite movie was Gone with the Wind.  “School let out, and everyone went to see it.  We even packed lunches,” she recalled. Her favorite actor was Tyrone Power; and her favorite actress was Mae West. “What a dame she was!”

Ro graduated with honors from Jackson High School in 1942 where she also played saxophone in the marching band. “I just loved music,” she said.  “I could never get enough of marching band and all the popular music of the time.”  She later attended Franklin Business School in Columbus, OH.

In 1944 she married Lt. Merrill B. Evans and traveled with him on his stateside tours with the U.S. Army prior to his leaving for overseas duty in the Asia-Pacific Theater in World War II.  When Merrill returned home from the war, they raised their four sons in Columbus, OH; Pontiac and Birmingham, MI; and, finally, in Des Moines, IA, where they lived on Woodland Ave in the Ingersoll Park area for many years until the boys all graduated from high school and moved on to college and careers. But, before her boys grew up and left home, Ro began planning what she was going to do after they were gone. She had too much energy and ambition to just sit at home by herself and do nothing.

Dogs were the answer.  Ro always loved dogs. She grew up with an Irish Setter, Lady, who was a mainstay at her father’s funeral home in Jackson, and she fondly remembered having a little white Spitz as a young girl.  Dogs became an important part of her own family as an adult too.  She made sure here was always a dog around as the boys were growing up: Buttercup, the mixed breed mutt – a black and white runt from the litter of the next-door neighbor’s dog “Nipper;” Lady, the Irish Setter, named after Ro’s setter in Jackson, who jumped the backyard fence in Columbus and ran loose all over the Ohio State agricultural campus  until somebody found her;  Mac, the indomitable Cairn Terrier who faced down the neighbor’s Boxer; and Tushka, the yippy little American Eskimo Dog aka “Spitz” that barked incessantly at anything dead or alive.

Ro decided to raise purebred dogs for obedience and show.  Since the American Eskimo Dog – her favorite - was not a recognized breed by the American Kennel Club (AKC), she chose the Samoyed Dog to kickstart her career in canine show competition.  These beautiful snow-white dogs with the smiley faces were a spitting image of the American Eskimo Dog, only bigger and with more hair. She started from scratch by installing some temporary kennels in the back yard of their home in Des Moines and bought her first “Sammy.”  The rest is history.

Ro and Merrill eventually moved to Waukee, IA, and purchased a small farm in nearby Adel to convert it into the nationally-renowned Samoyeds of Seelah Kennel and Training Center. Even after they sold Seelah many years later, Ro continued to judge at shows around the country and train different breeds in obedience and show for the new owner. Seelah Kennel and Training Center is still operating today and has hosted some of the top dog shows in the country.

During her career of more than 40 years breeding, judging, and showing dogs, Ro finished more than 25 AKC champions including the great Ch. Di Murdock of Seelah, ranked as the top Samoyed in the U.S. for two straight years by the Samoyed Club of America (SCA). He was also the number one stud dog for one year.  A popular crowd pleaser, Murdock became so accustomed to winning that he would automatically head for the winner’s stand whenever they entered the show ring and, to the chagrin of the show promoters, assume his accustomed­­ place at on the top of the podium even before the show started. The year after Murdock retired, his son – Ch. Murdock’s Marauder of Seelah aka Bucky  -  replaced his father as the top SCA Samoyed in the country.  Ro also owned and showed Little Bo Peep, the number one Samoyed Brood Bitch in the country for an unprecedented five consecutive years.

Over the years, as the big Sammies became too much for her to physically handle in the show ring, she “downsized” to raise and show Tibetan Spaniels, again achieving numerous breed and group wins. Her great champion General Thomas Jefferson Jackson won a record 35 consecutive Best of Breed Championships and finished among the top ten in the nation.

Ro was a longtime member of the Samoyed Club of America, the Des Moines Kennel Club, and Tibetan Spaniel Club of America.  She was a nationally-respected AKC judge for a variety of dog breeds, recognized for her knowledge and impartiality and her willingness to share her experience with others.

She and Merrill enjoyed traveling together before he passed in 2009.  “Copenhagen was my favorite place to visit,” she said. “I always hoped we could go back someday.” Someday never happened, but the memories remained.

She loved her sons and their families more than anything, but she used to laugh and say, “If I had known how hard it was to raise four sons, I probably would have just raised dogs instead.”  There was nothing she liked better than seeing her kids, grandkids, and great grandkids mixing and mingling and rolling around with her puppies. She loved them all, and they loved her back.  She was the real deal.

“Being a mother and being myself was the best experience of my life.  I feel happy that I could do all of this with a good husband who gave me four movie stars for sons. People might think I’m crazy, but I would have liked to have had two more,” she laughed.

Services to be announced.

To order memorial trees or send flowers to the family in memory of Rowena June Evans, please visit our flower store.