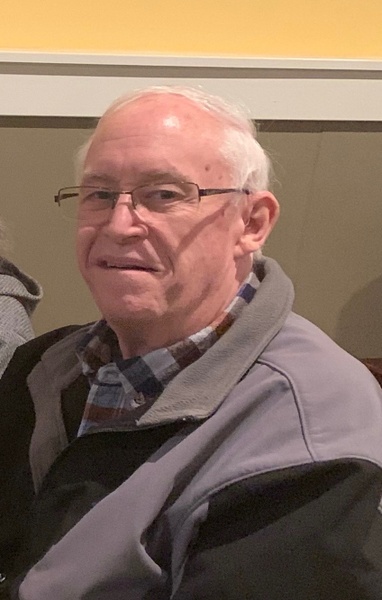 Steven C. Schafer (70) of Adel, Iowa passed away on March 3, 2022.
Steve (as he was known by family and friends) said he could tell who was close to him based on how they said his name. If someone called looking for “Steven”, he knew they must not know him and would hang up on them. If you stopped over and called him Steven, please leave.
Steve was a passionate individual. If there was something on his mind, he spoke it. Whether he was right or wrong, he was right.  Steve was affectionately given the name Grandpa Grumpy and enjoyed handing out candy to the kids and comforting little babies throughout church. Truth be told, he preferred when children couldn’t talk yet anyway, with the exception of his grandchildren.
Steve enjoyed making his famous New York Cheesecake for those who were lucky, and he would often deliver them to his family and friends. He shared a passion with his daughter, Catharine, for genealogy and family history.
Steve was born on September 16, 1951 to Gerald and Maxine Schafer in Waterloo, IA. After Steve graduated Grundy Center High School in 1969, he went on to study at Marshalltown Community College, where he received his Associate’s Degree. Steve always continued to learn and later earned his Bachelor’s degree from Upper Iowa University and his Master’s degree from Drake University.
In 1970, while in Marshalltown, Steve worked as a manager at Little Jenny’s, a local convenience store gas station. It was there he met his wife, Cathy. They dated for 2.5 years and were later married on September 22, 1973 in Grundy Center,  just 4 days after Cathy’s 18th birthday. Steve and Cathy went on to have 5 children: Catharine, Valerie, Matthew, Joseph, and Daniel.
Steve worked multiple jobs throughout his life, up to 3 jobs at one time to support his family. He took great pride in his work. He enjoyed spending time with his family and his grandchildren.
Steve was preceded in death by his parents Gerald and Maxine, his brothers Jerry and Paul, and his children Catharine and Daniel. Steve is survived by his wife Cathy, his children Valerie, Matt (Kelly) and Joseph (Jackie), and his grandchildren Kasey, William, Jackson, Mackenzie, Eli, Liam, and Jaren.
Services will be held at The Church of Jesus Christ of Latter-Day Saints in Waukee, Iowa on Friday, March 11, 2022. Visitation is at 11:00 am, funeral at 12:00 pm, and burial to follow. Steve will be laid to rest near his 2 children at the Oakdale Cemetery in Adel, IA.

Memorial donations may be directed to Steve's wife, Cathy Schafer, and will be used towards the purchase of a cemetery headstone.

Ernst Funeral & Cremation Services of Waukee has been entrusted with Steven's final arrangements.

To order memorial trees or send flowers to the family in memory of Steven C Schafer, please visit our flower store.