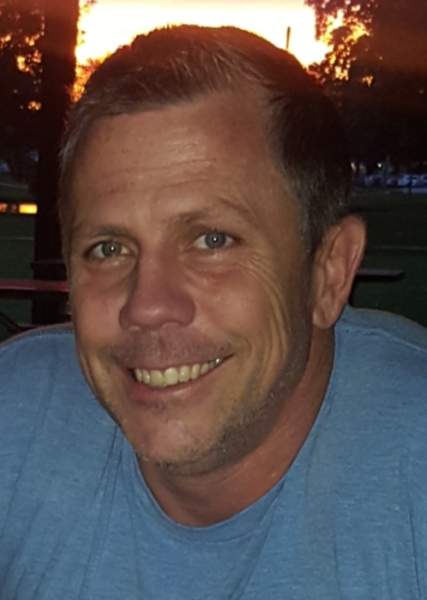 Dad to Emily and Nick; Husband of Denise; Son of Becky and Terry; Brother of Sarah/Carlos, Tony/Kathleen, and Brian; Uncle to Ben, Annabelle, Lauren, Talynn, Jessica, and Trevor, Todd passed away suddenly and unexpectedly of a heart attack on November 7th.  Visitation will be Monday, Nov. 11, 2019 from 4:30 to 6:30 p.m., followed by a time of remembrance sharing at 6:30, both at Ernst Funeral Home, Waukee.  Funeral Services will be held Tuesday, Nov. 12, 2019 at 3:00 p.m., at Lutheran Church of Hope, West Des Moines Campus.

Todd was an artist, hockey player, and recovering Cyclone fan whose two kids favor the black and gold, Todd could be found most weekends working on classic cars, painting motorcycles, or tailgating in Ames or Iowa City. He was also a proud member of the Sons of Amvets.

Todd grew up in Waterloo and graduated from West High in 1990. He acted in school plays, played trumpet and football, ran track, and dabbled in diving. Todd restored and cruised University in his 1964 Impala before anyone in the Midwest knew that was cool, ultimately taking over the family garage with the shell of an additional ‘63 and its many accompanying spare parts, constantly “losing” Terry’s tools along the way. This rich experience set the stage for future endeavors with Nick and his many Camaros (one of which was actually completed!).

Todd learned the value of hard work at a young age. Whether it was detassling corn, lifeguarding, bussing tables, welding, security, Todd always had his hands in one enterprise or another. Later in life it was digital animation and IT consulting work where he put to use his degree in biomedical engineering, which he earned from Iowa State in 1995. His career path took him to Ames and West Des Moines/Waukee over the course of the past 25 years.

Unable to envision post-college life without Denise, he soon proposed and they were married that same year. Emily came along a couple years later, and Todd, always the sentimental fool with his heart on his sleeve, was quickly and forever smitten. With Nick’s arrival he had his hockey player/grease monkey, and the person to carry on his loving and sentimental spirit.

Todd will be sorely missed by his immediate family, dozens of cousins, aunts, and uncles. The lives of countless others have been touched by his life-of-the-party attitude and generous spirit. He joins all four grandparents (Alice and Delmar Anderson, Jean and Floyd Brekke), two cousins (Bruce and Joe), Uncles Dave and Ingevald, Aunt Elinor, and close friends, sadly too numerous to list, in the warm grasp of our Lord and Savior Jesus Christ.  Todd had the biggest heart and he shared it with everyone he encountered.

In lieu of flowers, memorials may be made in the name of The Todd Brekke Scholarship Fund, which the family anticipates launching in dedication to the support of kids sharing of one or both of Todd’s passions, hockey and art. Please send to 1808 Redwine Terrace, Brentwood CA 94513.

To order memorial trees or send flowers to the family in memory of Todd Paul Brekke, please visit our flower store.